We went to Slimbridge WWT to look for the Grey Phalarope & 5 Greenland White - fronted Geese. In the Rushy Pen were two 1st Winter Female Greater Scaup and a few Bewick's Swans with other Winter wildfowl. On the Tack Piece were Redshank, Golden Plovers, Curlews, Black - tailed Godwits & European White - fronted Geese. We couldn't see any Greenland from the Robbie Garnett Hide. There was a Female Ruddy Shelduck from the Holden Tower with a Hybrid. Near the South Lake Observatory Hide I spotted a Goldfinch feeding on a teasel and a Goldcrest. Dad managed to see a Water Rail, but Mum and I missed it. We couldn’t see the Phalarope either. It was there but very elusive. It kept disappearing into the reeds. Not as easy to see as the last two Phalaropes that I had seen at Farmoor.

We went to Winterbourne pond to see the Carolina Wood Duck which had made a return visit this Winter with some Mallards. Afterwards we went to Sharpness to see the Black Redstart for the year. The Male was still hanging around by the Ned West buildings. The Female was also present by one of the gates but much more elusive.  We finished at Northwick Warth to look for the Slavonian Grebe which was present for it's 2nd day. It was nice to see one in the Winter Plumage. When leaving New Passage we spotted a Fieldfare perched in a bush. It was very muddy after all the rain we’ve had and the path was slippy. I managed to slip over and got back to the car a bit dirty. It was worth it though.

We went to Horsbere Brook Flood Lake near Gloucester where a pair of Penduline Tits had been seen for a while. There were lots of people there looking and the lay-by was full of cars. We managed to see them feeding on the reed-mace. The birds were both Males as they had a bold black mask through their eyes. Lovely bird to see and the people watching them were really friendly and helpful.

21st
We went to Norfolk for my birthday weekend and on the way up we had a quick stop at Downham Market to try to see the Serin, that had been present for a few days.
The Female was first perched in a tree and then spent most of it's time feeding on the ground for seeds that had been blown off thistles. Afterwards we made our up to Hunstanton to the flat we were staying called Belle Vue.

22nd
The following day was a real washout with rain forcast all day so we couldn't do much. We started at the Wolferton Triangle where we had a brief view of a Male Golden Pheasant as he walked back into the Rhododendron Bush and sadly didn't show again. We then went to Flitcham to look for the Pallid Harrier that had been present since December but it didn't show at all. There was loads of Bramblings in the nearby bushes and a few Tree Sparrows. From the Abbey Farm Hide there were a few Red -  legged Partridges and 2 Eygptian Geese. As the weather was no better we decided to go and have a look at Sculthorpe Moor Nature Reserve. It was a bit late to walk around it, but decided to come back the next day. The weather was clearing a bit, so we went to Snettisham to see the Geese flying in to roost. We saw a Muntjac Doe on the approach road. In the car park at Snettisham a Common Redshank was feeding by a large puddle. There was a lovely sunset and we saw loads of Pink - footed Geese flying over the beach heading to roost on the Wash. There were 2 Turnstones foraging along the beach and a flock of Sanderling flew past. We saw a Fish & Chip shop there, so Dad went in to get some for our supper. While he was in there I saw 8 Woodcock fly over. We saw on Twitter that 5 Sperm Whales were in trouble at Hunstanton today. When we got back, Dad went down and saw that one had beached itself. People were there with spotlights trying to help it. 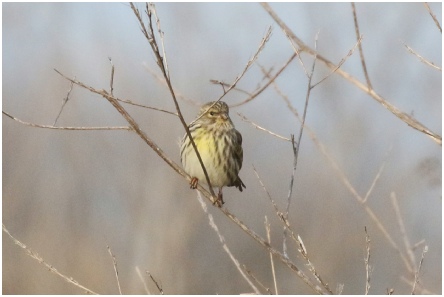 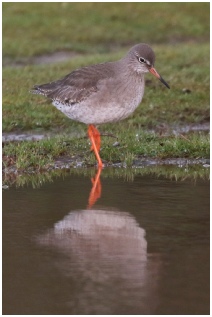 24th
We were on our way to Cley when Dad spotted a Barn Owl flying away over the fields. At Holme Dunes we saw a Curlew of the golf course. Mum spotted a Short - eared Owl fly over. I saw only as a silhouette which made me mistake it for Barn Owl. We also saw 2 Dark - bellied Brent Geese on the edge of the estuary. Near Holme next the Sea we saw 2 Barn Owls hunting around the field during the day. In Thornham Harbour were some Dark - bellied Brent Geese and a Curlew. Brief views of Twite and a distant Merlin perched on a post.We went to Cley Marshes and to the new Babcock Hide. It was a very muddy walk and not much to see at the end. The Grey Phalarope had gone and the Water Pipit was elusive. We did however manage to catch up with some Snow Buntings on the beach. Dad saw something on the beach and on closer inspection, it turned out to be the body of a long dead Whale. Not a Sperm Whale, but some smaller species. Out on the sea were some Common Scoter. From the East Bank we saw Little Egret, Marsh Harrier, Ruff & Dunlin. At Bishops Hide there were a few Avocets roosting on Pat's pool. A Ringtail Hen Harrier flew along the back of the reeds and flushed the Brent Geese from the field. We also had an excellent views of a Marsh Harrier both perched and flying past. In the late evening from the Beach Road we saw both Barn & Short - eared Owls out hunting around the marshes. 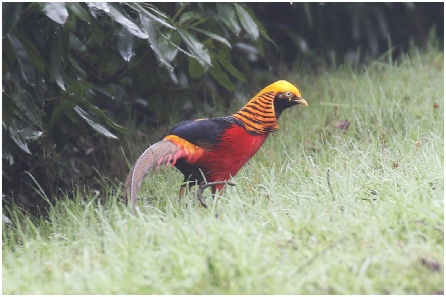 23rd
Dad went to the beach this morning and the Whale was dead unfortunately. Four made it back to the sea. We went back to the Wolferton Triangle and managed to get a better view of the Male Golden Pheasant before walking back into the bushes. It was a bit tricky for photos as it was behind us and I daren’t get out the car, but I got a few. Back at Flitcham the Pallid Harrier didn't put in an appearance again. There were still a few Bramblings about as well as a pair of Eygptian Geese. We had a better view of a Male Brambling perched on top of a tall tree further down the road the Abbey Farm entrance. Afterwards we continued down to another field where there were some Grey Partridges & Brown Hares. We went to Sculthorpe Moor to explore and see what it was like. There were some feeders by the viewing screen where we saw Bullfinches, Bramblings, Marsh Tit, Long-tailed Tits & Robin. Suddenly everything disappeared as a Sparrowhawk passed through the area. There were more feeders by the Woodland Hide and provided similar species. These included Brambling, Greenfinch, Long - tailed Tit, Blackbird, Great Spotted Woodpecker & Marsh Tit. Just as before a Male Sparrowhawk dashed past the area panicking the Blackbirds. Some more feeders were in the woods but these had attracted a Treecreeper. A Male Sparrowhawk was perched on the branch above and flew off. Is he following us? We walked along the rhine where a stoat in ermine had been seen recently. We didn’t see the Stoat but saw a nice Common Pheasant. The Fen Hide also had some feeders. It is nice that Sculthorpe put out loads of feeders around the reserve. This attracts lots of small birds like Bullfinches, Bramblings,Reed Buntings & of course, Pheasants. The Sparrowhawk once again scared the birds off the feeders. I think he was following us! The Tower Hide is a new hide that had been opened recently. It was very nice, but the only downside was that only four people can look out at the feeders & there is no space behind the seats to get in or out because of the board behind. As well as the regular birds, these feeders attracted some Siskin and Lesser Redpoll.

We a saw Male Muntjac Deer from the boardwalk. On the way back to the car park we managed to find some Scarlet Elfcups. On leaving Sculthorpe we saw a Pair of Eygptian Geese displaying on the roof. Back at Flitcham we still didn't see the Harrier, it had become very elusive in recent weeks. Two Grey Partridge were there with some Red - legged Partridges. 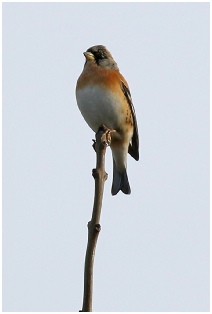 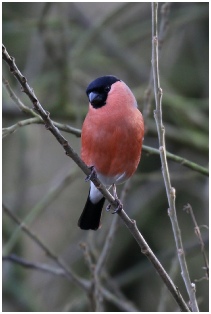 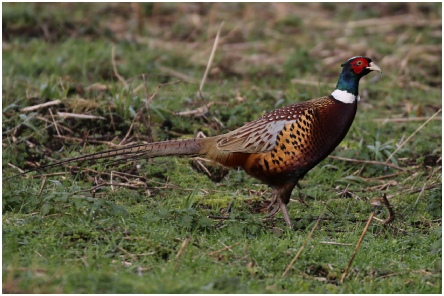 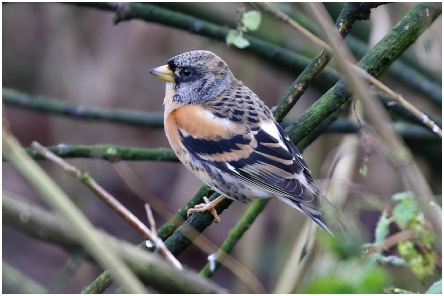 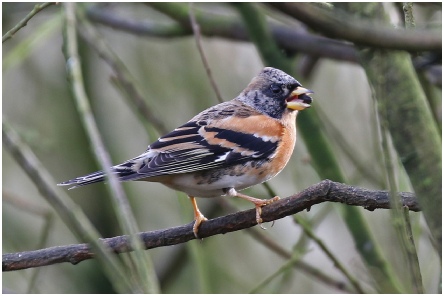 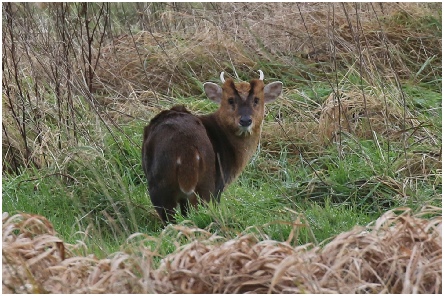 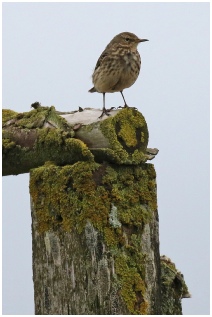 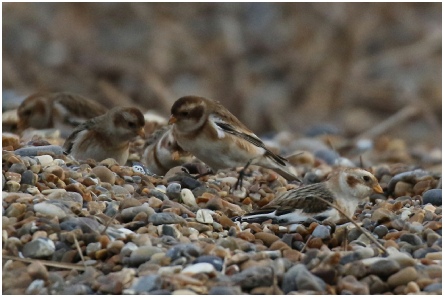 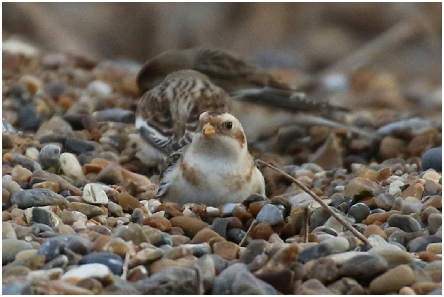 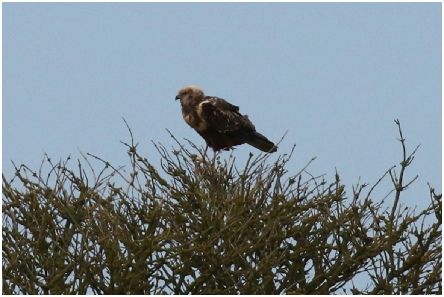 25th
We walked to Thornham Point to see what birds were about. There were a few Curlews and Common Redshanks. A Female Marsh Harrier flew past and flushed the Pink - footed Geese. We saw a few more flying and landing in the field to join the others that are feeding. We saw a Goosander on the pool and Red - breasted Merganser on the sea. On the way back we managed to see about 20+ Twite feeding on the seeds below the footpath. They were a bit flighty at first but settled afterwards. We went to Titchwell RSPB and we started with a nice Male Brambling on the feeder. Meanwhile Dad was watching a Water Rail in the ditch beside the main footpath but it had gone before I got there. Another new bird for me was a Water Pipit that was showing on Thornham Pool with some Meadow Pipits. A few Brent Geese were grazing on the marsh which was visible from the West Bank footpath. Out on the Beach we saw Common Scoter, Grey Plover, Goldeneye, Bar - tailed Godwits, Knot, Turnstone, Oystercatchers & Ringed Plover. From Parrinder Hide a Male Marsh Harrier was flying around the back of the reeds.  We headed to Choseley to see Rough - legged Buzzards. There was only one that flew over the far fields that we saw and loads of Brown Hares. Finally back at Flitcham at the end of the day and at last we were rewarded by the appearance of a Hen Harrier & brief view of Pallid Harrier. Then the long journey home. Three new birds for me and one for Mum & Dad. Not bad!

P.S. The four Whales that got away from Hunstanton were found beached near Skegness. Really sad end for this pod of Sperm Whales. 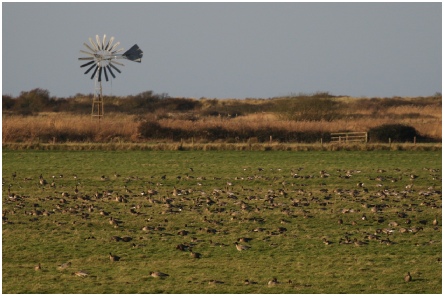 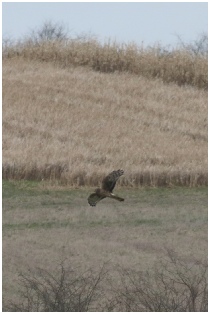 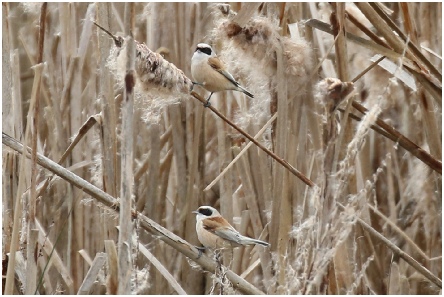 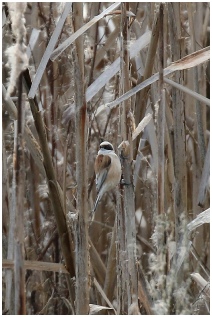 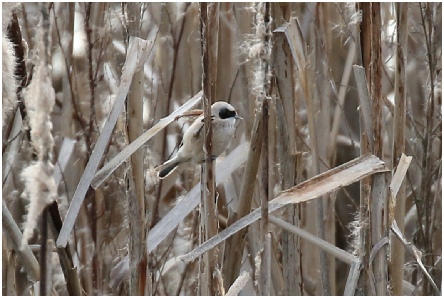 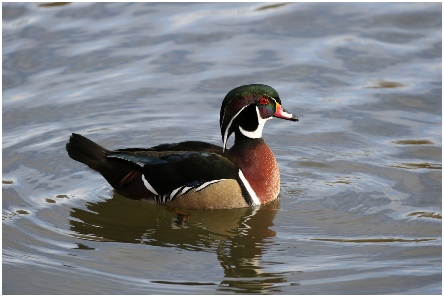 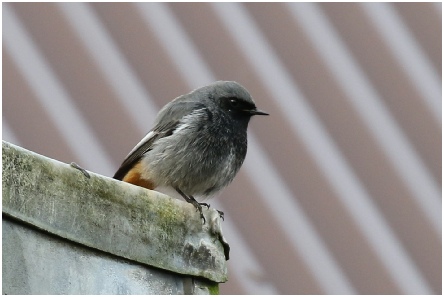 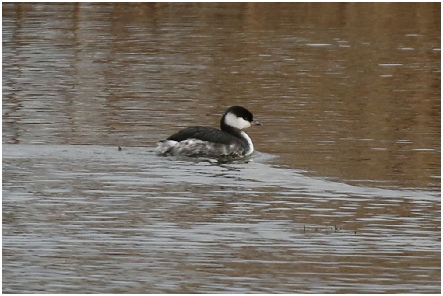 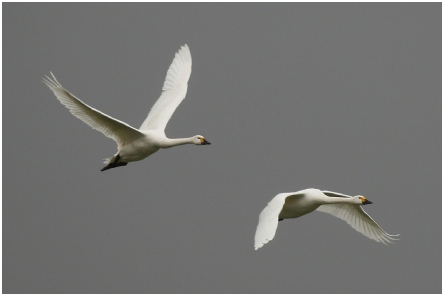 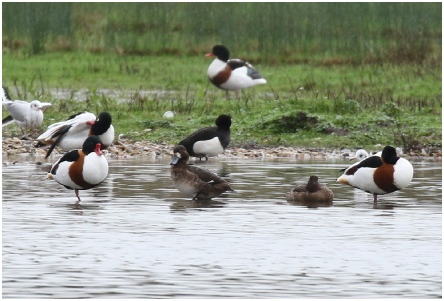 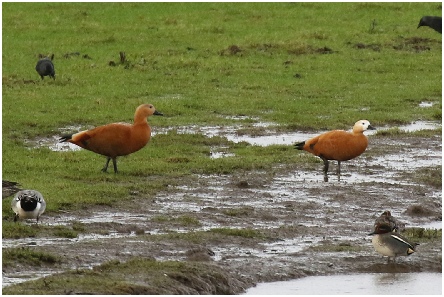 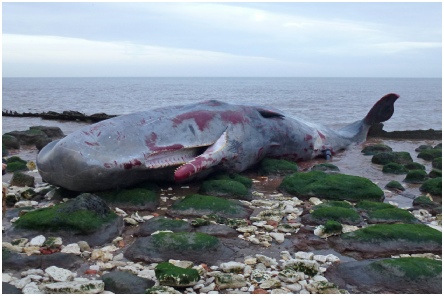 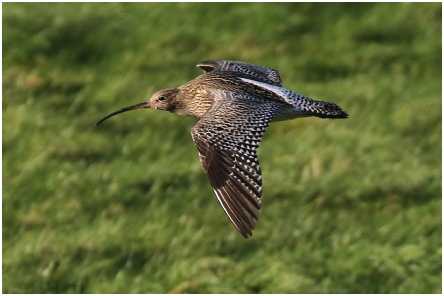 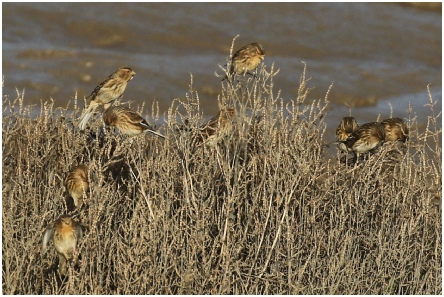 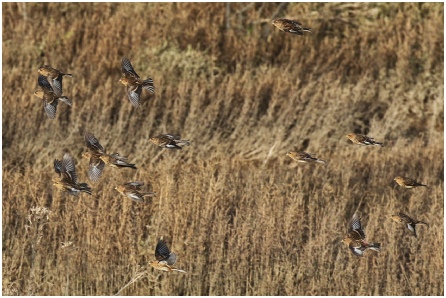