Friday 15th June 2018
We travelled up to Llandudno, ready for an early start to Northumberland the next day. We explored around the Great Orme, looking for Choughs. We parked in a layby to let a few cars through, when we saw a massive group of Silver-studded Blues and a couple of Graylings. These Butterflies must have just emerged in excellent numbers. While we were looking at them a couple of Chough flew past calling and disappeared round the corner. We drove round in the direction that they had headed and we saw some Welsh Mountain Goats, so we stopped to have a look at them. Just then 3 Choughs appeared and started to feed in the grass near the Goats. Afterwards, we went to get supper in Llandudno before heading to the B&B and Dad started back for home. We got up at 5:30 to be ready for 6:15 for our journey to Northumberland with Ruth & Alan of the Biggest Twitch. We were the first ones to be picked up. After we picked up everyone else, we headed to our first stop on our holiday at Saltholme RSPB with a short stop en route for some breakfast as we had left so early. We arrived at Saltholme RSPB mid morning and just before parking, a Male Marsh Harrier flew overhead. There were feeders in front of the Visitor Centre, which attracted Goldfinches, Greenfinches, Stock Doves, Common Starlings & Tree Sparrows. Suddenly, they all took  off as a Sparrowhawk flashed through, but I don't think it took any of the Sparrows. Also from the Visitor Centre was a colony of Common Terns, Great Crested Grebes with young, a Black Swan and Mute Swans. We walked down to the Saltholme Hide and on the way the down, I spotted a Dragonfly which landing on the path. I later identified it as Female Black-tailed Skimmer. There was plenty of birdlife from the hide which included Black-tailed Godwit, Common Swifts, Black-headed Gulls, Common Tern, Avocets & the star bird was the Little Ringed Plover. This bird spent quite a lot of time feeding right in front of the hide, giving us fantastic views. Other birds on the reserve were Wigeon, Gadwall, Tufted Ducks, Common Pochard, Meadow Pipts & Common Teal. We had lunch in the Visitor Centre cafe before heading further north. Next stop at Druridge Pools in Northumberland. We went here to look for the Glossy Ibis and the Wood Sandpiper, however the first bird we saw walking down was a Cuckoo flying. The first damp field had Dunlin and Ringed Plover feeding. I also photographed a Skylark briefly perched on a fence. In the second field, we were not disapointed as we watched a Glossy Ibis & Wood Sandpiper feeding in the same pond. A Whooper Swan was further over in the same field as the Ibis & the Sandpiper, but kept disappearing at times. We headed back towards to the carpark & the final bird of the day was a Male Marsh Harrier flying over the fields. We continued our journey to the Black Bull Inn at Lowick. It was a lovely room made even better with me and Mum watching a Spotted Flycatcher from our hotel window. 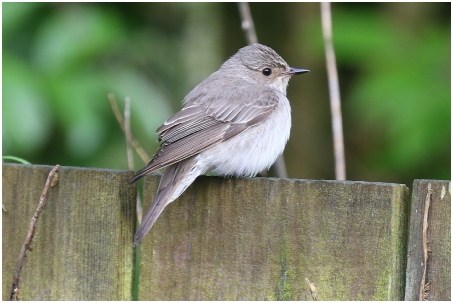 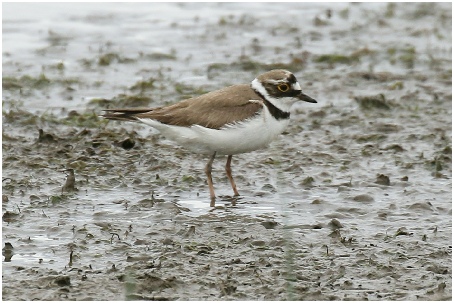 After an early breakfast, we headed to Seahouses to catch the boat to the Farne Islands. On leaving Seahouses, we saw Common Eiders with a few ducklings. Further out in the open sea, we had our first encounter with Puffins, Common Guillemots, Kittiwakes, Razorbills & Shags. Resting on the rocks were a mixture of Common & Grey Seals. After sailing around the islands, we made our way to Staple Island. This time we managed to land on the Island, which can be impossible to do on some days. Upon landing, we were overwhelmed by close views of hundreds of Auks. Guillimots and Razorbills seem to be nesting on every available inch of the pinnacles. A Puffin would drop in every now and then with a beakful of fish before flying off. There were also Kittiwakes & a few Fulmar. Shags were close by & some, if not all of them had chicks. There were a few Herring Gull & Great Black-backed Gull around the island & some had chicks wandering around.

We sat and had our lunch, before catching the boat over to Inner Farne. On arrival, the Arctic Terns started attacking us almost immediately. The reason was that the Terns were on eggs or young. The young Arctic Terns that had hatched were stille quite young and being cared for by the parents. There was one very rogue Arctic Tern, that kept attacking everybody who went down to the toilet. I got pecked a few times on my head, it's good thing I wore my hat. A few pairs of Common & Sandwich Terns nest on the island as well, but in very low numbers. It also has a large number of Guillemots, Razorbills, Shags, Kittiwakes & Puffins. The Adult Puffins were flying back and forth with sandeels for their chicks [Pufflings]. However they didn't always get in their right burrows and if a Puffin makes a wrong move, the Sandeels will be taken by a Black-headed Gull. We were cheering the Puffins on everytime they landed with their fish. Many did make into the burrows without losing their catch. We only managed to see one Rabbit during our visit. I expect the others were underground. On our way back, we spotted a Puffin lpeeking out of its burrow. Maybe it was looking for its mate to bring the food back. We made our way to the quayside where some more Common Eider were seen. We then caught the boat back over to the mainland. What a wonderful place!!! 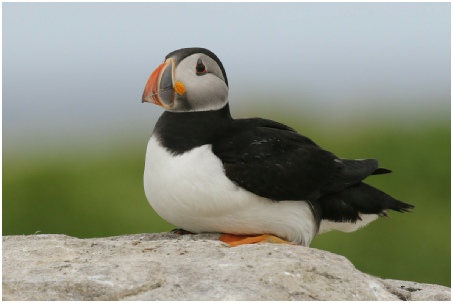 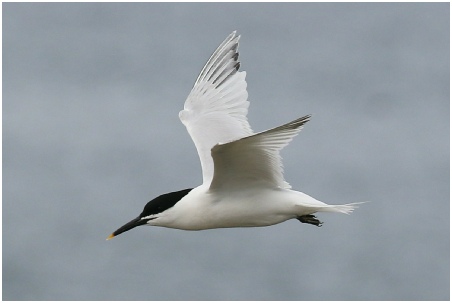 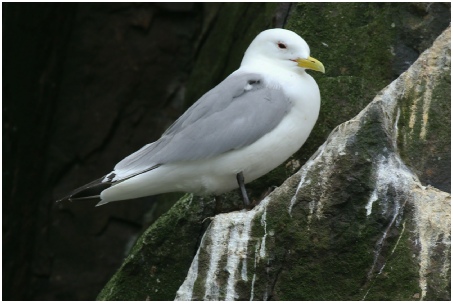 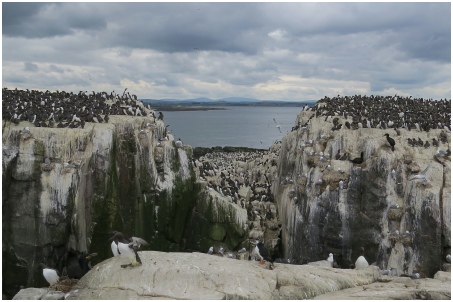 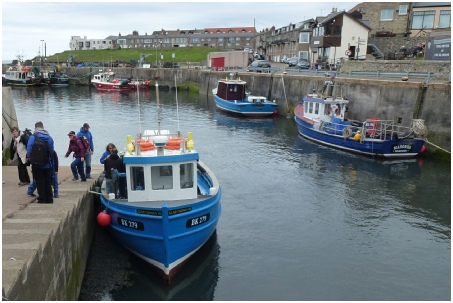 After breakfast, we headed off to Holy Island at Lindisfarne, which is only accessible at low tide over the causeway. It was a lovely place to explore & with it's own castle. On the shoreline were a couple of Bar-tailed Godwits, Ringed Plover & Rock Pipits. Some Grey Seals were hauled out on the beach. Distant Little Terns flew over the estuary. Quite a number of Goosander were seen on the estuary. From the castle view point, we saw a Gannet flying past. A Male Reed Bunting was singing in the field and a few House Sparrows were drinking from a puddle. House Martins were collecting mud for their nest. We had lunch in Beal Barns Cafe. We spent the afternoon visiting Low Newton Pools.We had a very unusual sighting of a Pink-footed Goose feeding with Greylag & Canada Geese. Also on the pool were Gadwall & Common Teal which showed very well. The Lapwings were feeding on the muddy edges of the field, as Swallows & Martins, accompanied by the occasional Common Swifts flew around. Also around were Skylarks, Meadow Pipits and 2 Juvenile Stonechats which were feeding on the track. A Chiffchaff was flitting about in the bushes. On the beach, we saw a Little Tern flying & landing on the rocks. 5 Ringed Plovers were also seen on the beach. Afterwards, we headed back to our hotel where me and Mum watched the Spotted Flycatcher again. 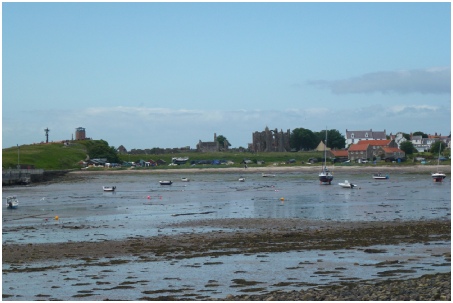 After breakfast, we headed to Harthope Valley to have an explore around. First bird we saw was a Grey Wagtail. This was soon followed by a sighting of a Dipper feeding chicks. A Curlew flew over giving the distinct bubbling song. A Peregrine & Kestrel flew over the valley. We managed to see a Red Grouse further up the valley. Common Sandpiper & Oystercatcher were both very panicky. A Spotted Flycatcher was perched nicely in a tree & a Brown Hare was feeding. A Lesser Redpoll flew over the road & called briefly. Both Green & Great Spotted Woodpecker flew over calling. A couple of Red-legged Partridges and Treecreeper were seen as well. We had lunch in Wooler. We headed back southward to Amble Dunes, which overlook the RSPB Reserve at Coquet Island. Through the telescope, the Roseate Terns could be seen. Roseate Terns are Britain's rarest species & because of it's status, Coquet Island is not open to the public. You can view the island from special boat trips from Amble, but cannot land. There were other Terns seen including Arctic and Common. Plus a few Puffins were swimming on the water and a Common Guillemot. A Gannet flew past and also a couple of Male Common Scoters. Then it was back to the hotel to pack. After Breakfast we loaded up the minibus and headed south to Leighton Moss RSPB. We arrived there in time for lunch. On the feeders by the Visitor Centre were some Bullfinches. After lunch, we went to look on the feeders where a Marsh Tit was giving good views. We went up the tower hide overlooking Lillian's Lake. Marsh Harriers were flying around the reserve & a Mute Swan swam on the lake. A Family of Long-tailed Tits were flitting through the trees below the tower. After a while, the Bittern flew from the direction of the Grizedale Hide & landed in the reeds in front of Lillian's Hide. It remained hidden in the reeds for the rest of our visit with just fleeting glimpses of its head when the reeds blew in the wind. We had to leave at 3:00, as we still had a long journey back to Llandudno. Huge thanks to Ruth & Alan for leading and to Tony, Eva, Ray & Jayne for their company. What a great holiday! 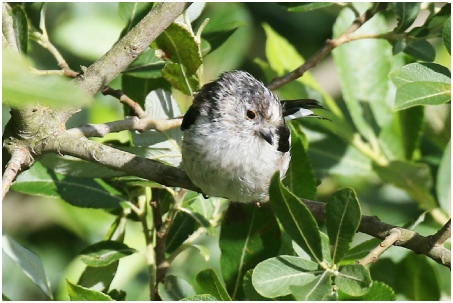 While we were waiting for Dad to pick us from Llandudno, me & Mum took the tram up to the Great Orme. We explored around the top, looking for Choughs. We saw Silver-studded Blues, Graylings, Stonechats, Rabbits, Raven, Peregrine, Buzzards and Wheatears. We saw the Choughs again, but very briefly. We then caught the tram back down to the town of Llandudno. After meeting up with Dad, we headed off to Glaslyn Osprey Project. We saw the the last train of the day from Caernarfon to Portmadog going through Pont Croesor behind Garrett loco no 87. The Female Osprey called Mrs G was on the nest with the chicks seen on the webcam from the new Visitor Centre. On the feeders were Siskins, Blue Tits, Great Tits, Great Spotted Woodpecker & Nuthatch. A Sedge Warbler was singing in the reeds. Then we started to make our way home. 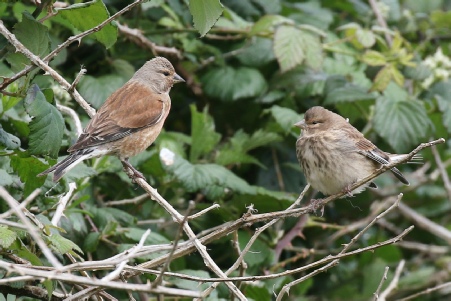 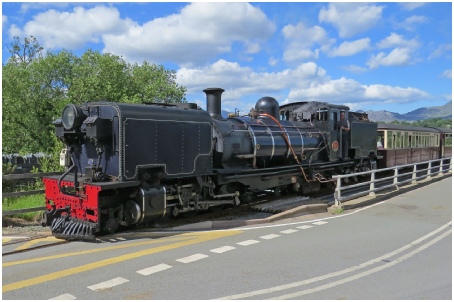