We started our visit to Slimbridge WWT at the Rushy Pen. A Lapwing was foraging in front of the hide. A few Bewick's Swans had arrived to spend the Winter. From the Martin Smith there was a few Pintails & a Common Buzzard perched on the fence post. At the Robbie Garnett Hide we saw quite a few Pintails & Greylag Geese. We also had a better view of the Common Buzzard. At the Willow Hide was a Great Tit, Blue Tit, Moorhen, Common Teal & House Sparrows. It was good to see the Bank Voles back in their holes along the Holden Walkway. Back at the Martin Smith Hide, the Common Buzzard was still perched on the post, until it got chased off by another Common Buzzard. At South Lake, I was looking out for a hybrid between Ferruginous Duck & Pochard, but no luck. There was loads of Herring Gulls, Black-headed Gull,Tufted Ducks & Common Pochards.

We went to Martin Mere WWT on the 2nd day of the North West Birdwatching Fair. There was still pently of Pintails, Whooper Swans. The White-headed Ruff showed well in front of the Discovery Hide. A Black-tailed Godwit was still present with the wildfowl. We had another quick look for Tree Sparrows & showed well perched in the trees. We popped to nearby Marshside RSPB to see what it was like. There was a Curlew, Common Teal, Common Gull, Black-tailed Godwits & Pink-footed Geese. We saw a few Pink-footed Geese fly over the road & feeding on the saltmarsh by the road. We went back to Martin Mere WWT for the rest of the afternoon. From the Hale Hide, Whooper Swans were still feeding on the Sugar Beet. A few Greylags were also present. A Female Common Kestrel was perched on the gate. In the late afternoon, we waited for the Swans to arrive on the mere for the 4:00 feed. A few Ruff & Lapwing flew around in front of the screen. Five Common Snipe showed well on one of the nearby islands. In the near darkness the Pink-feet flew in, after spending the day feeding out on the reserve. A great weekend!

We headed up to Martin Mere WWT in Lancashire for the North West Birdwatching Fair. We started at the Discovery Hide, where we had good views of Lapwings, Pintails, Black-tailed Godwit, Ruff & Whooper Swans. The Tree Sparrows are still doing very well. We had a quick look at the Ron Barker Hide. Two Pink-footed Geese showed closer to the hide, except the gate was in the way. Also 2 distant Marsh Harriers. Thousands of Pink-footed Geese flew over the grounds. From one of the viewing screens, a Common Buzzard was seen on the post, on the ground & then flying away. As the daylight faded, the Whoopers started coming in for the 4:00 feed. The Pink-feet did another flypast over the grounds. A Common Pheasant walked past one of the hides. We watched thousands of Starlings coming in to roost. A few Ruff were seen on one of the island including a white-headed bird. Also Whooper Swan & Pink-footed Geese flew through the Starling flock. We saw the Pink-footed Geese roosting on the mere as the light faded.

We went to Chew Valley Lake to see the Male Long-tailed Duck that been present for a day. A few Goldcrest were flitting amongst the trees near the picnic site. We managed to find the Long-tailed Duck, but right on other side of the lake. We had a drive around to Woodford, but no sign. We headed to Heron's Green Bay, where we saw several Goosanders with 2 Great White Egrets. Good numbers of other Widfowl. A couple of Ravens flew over. We headed down to Moreton Hide, where a pair of Bewick's Swans were taking up temporary residence. At the Stratford, was another Great White Egret resting on the island. At Herriott's Bridge, a Water Rail was foraging along the bank before heading back into the reeds. We headed back to the picnic site & sadly the Long-tailed remained distant all day. Still, just hope it will winter there and I might see it again.

We started our 2nd day birdwatching along the coast at Hunstanton. We saw a good number of migrating birds coming in from the wash, such as Common Starlings, Red-troated Diver, Chaffinches, Mistle Thrushes, Lesser Redpoll, Siskin and a Merlin. A few Fulmars were flying around the tops of the cliffs. We then headed to Choseley Barns to look for the Dotterel which had been seen with a flock of Golden Plover. There was certainly good numbers of Golden Plovers in the field, but no Dotterel. We headed on to Titchwell RSPB to explore around & see what we can find. A few Dark-bellied Brent Geese were seen on the freshwater marsh & flying over the reserve. We also had a very brief view of 2 Bearded Tits from the West Bank footpath. We headed straight for the beach and the sea, we saw 2 Long-tailed Ducks, Common Scoter & Slavonian Grebe. It's also a good place to see Sanderling. They are quite fairly used to people & by standing still, letting them come to you, you should get exellent views sometimes within 20 metres. Also Turnstones & Bar-tailed Godwits were seen foraging along in variable numbers. We headed along the West Bank footpath towards the Visitor Centre. An Adult Black-tailed Godwit was feeding close to the bank. A Little Egret kept chasing the Black-headed Gull out of it's feeding territory. A few Ringed Plovers were foraging on saltmarsh. We had lunch near the Visitor Centre. On & around the feeders were Wood Pigeons, Robins, Chaffinches, Magpie, Moorhen, Greenfinch & a very scruffy Male Common Pheasant. We went back to Choseley Barns to check through the Plover flock one last time. Still no Dotterel. Near Holkham, we saw a distant flock of thousands of Pink-footed Geese in the field and a close pair of Eygptian Geese. Our final port of call for the day was Wells-next-the-Sea. Apart from the Starlings that were seen and calling around the town. There was a Common Gull, Mallards, Black-headed Gulls, Herring Gulls, Dark-bellied Brent Geese & another Barn Owl flying distantly. We went to Thornham Marsh to watch the sunset over the church.

We went to Norfolk for a few days with Martin McGill who is one of the Wardens at Slimbridge. We got to Norfolk in the late afternoon and explored around the NWT reserve at Cley Marshes. We saw a pair of Eygptian Geese in one of the fields. Flocks of Teal & Wigeon were also in good numbers. Two Common Snipe were feeding in saltmarsh. A Grey Heron stood on the bank. On Simmond's Scrape, Martin spotted a 1st Winter Caspian Gull with a small flock of Herring Gulls. There was also Grey Plovers & Dunlin. A Little Egret was foraging in a small pond close to the East Bank footpath. Two big groups of Common Eiders flew west along the beach. When we got to the beach, we scanned around to see if any Little Auks were flying past. The weather condition was right, but sadly no Auks. We did see some Snow Buntings feeding on the beach, although they were very flighty. A couple of Grey Seal were swimming just off shore. Before exploring around Cley Marshes, we stopped along the Beach Road & looked through a thousands of Dark-bellied Brent Geese in the Eye Field for the Black Brant. We went back later in the day & a Pale-bellied Goose was found agmonst the group. Suddenly I spotted a Barn Owl flying halfway along the beach road, before heading towards the windmill. What a wonderful end to the first day! 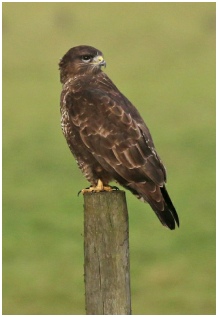 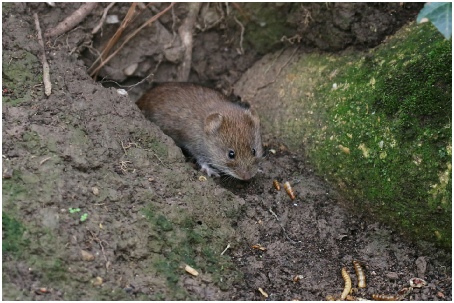 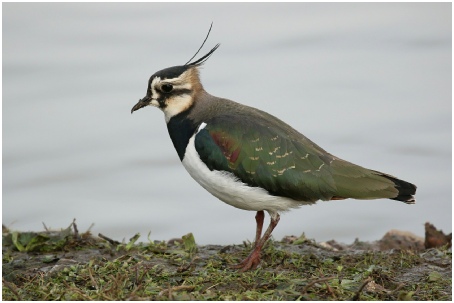 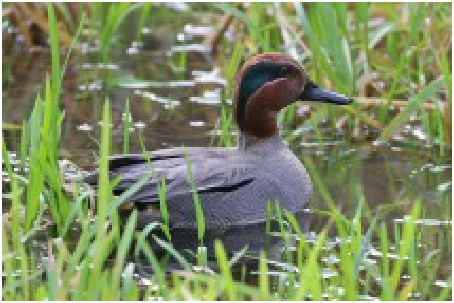 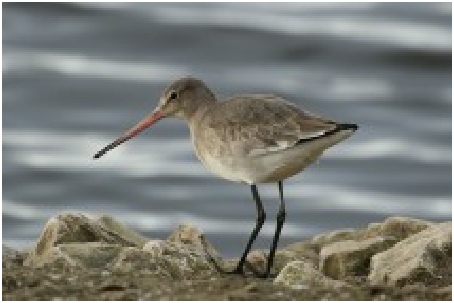 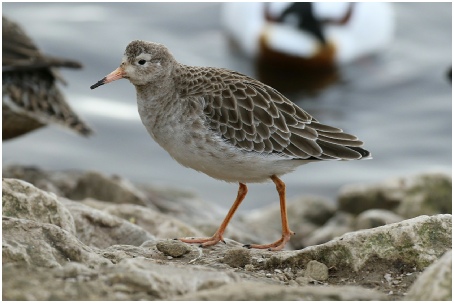 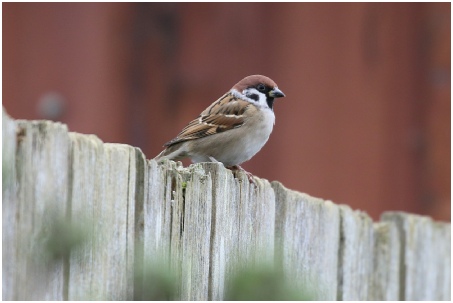 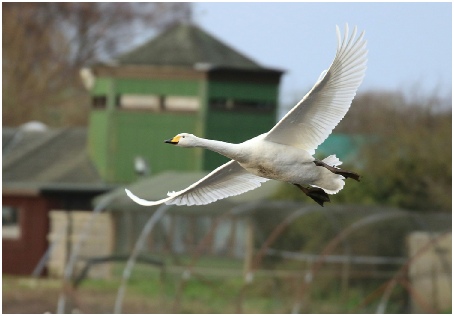 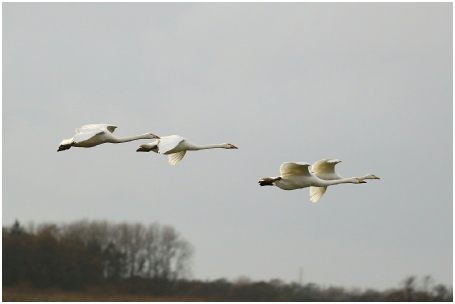 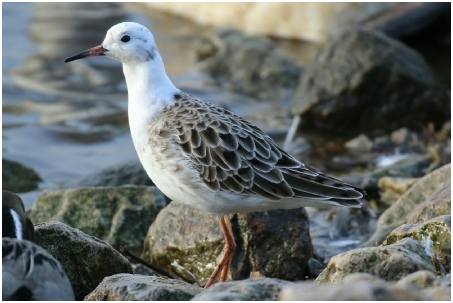 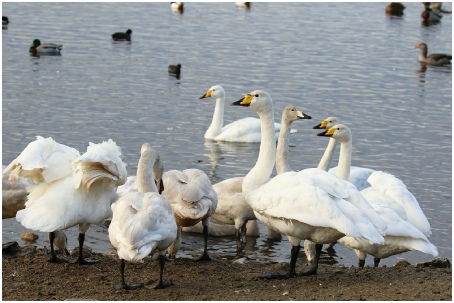 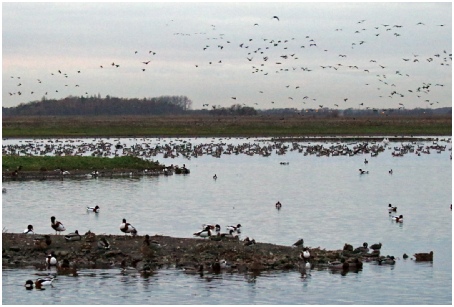 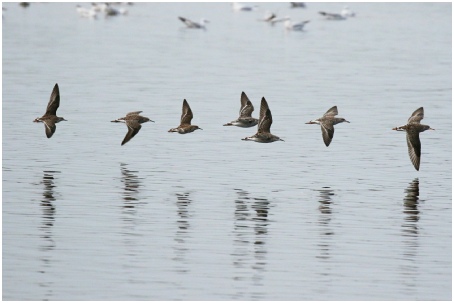 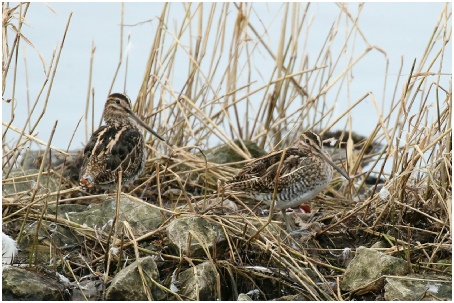 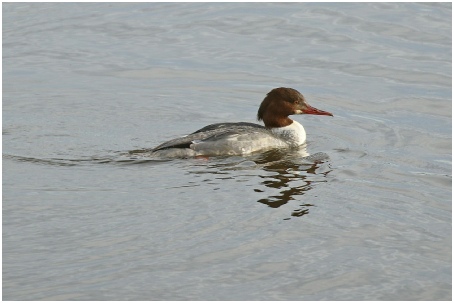 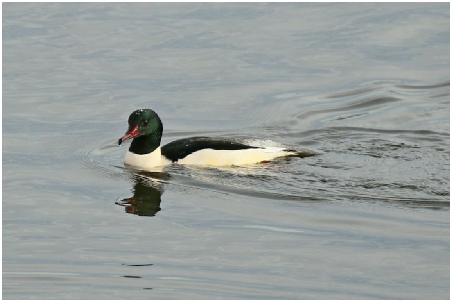 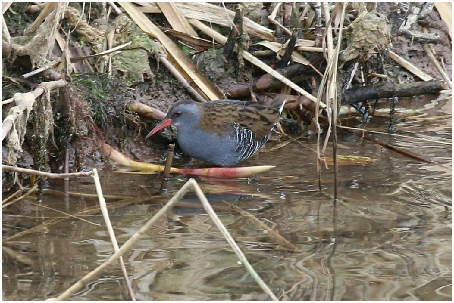 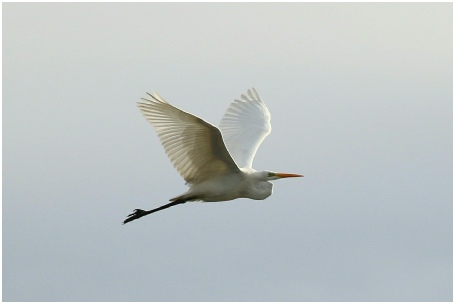 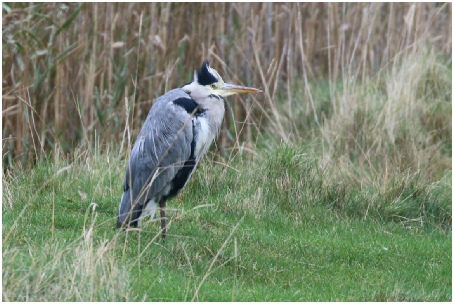 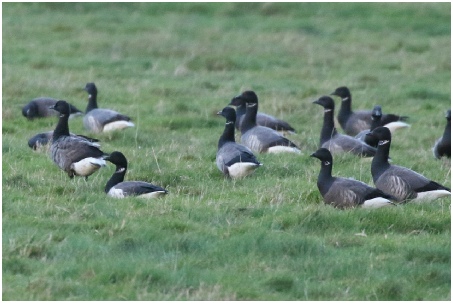 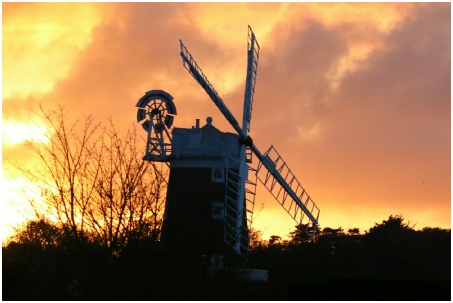 We started our final day in Hunstanton with a bit of seawatching, but nothing in the way of passage birds. We continued on to Thornham Marsh to look for the Twite. A couple of Stonechats were seen along the bank. We had an impressive line of all 17 Twite perched on the fence, before they all flew down onto saltmarsh to feed. Because it was windy, the Twite were having to feed lower down. Bar-tailed Godwits, Curlews & Common Redshanks were feeding in the creek. We then headed to Salthouse, where the Turnstones are very used to people as often get fed at the old site of the car park. Also a Common Gull dropped in a few times with some Black-headed Gulls. Back now to Cley-next-the-Sea for the last look for the Black Brant. It was eventually found feeding in amongst the Dark-bellied Brent Geese, so it was not as easy to see as last time. Afterwards the flock took off & flew eastwards, where the flock spilt up. One of our final quests was to find a big flock of Pink-footed Geese. We managed to find some in the field between Docking & Great Bircham. Martin spotted one of Pink-feet with very orangy legs & a Tundra Bean Goose. Our final quest for this Norfolk holiday was for Grey Partridge & Tree Sparrow. We saw both of them at Flitcham, although when we pulled up the small group of Grey Partridges ran for cover. The Tree Sparrow was perched on top of the bush by the road. It was a marvellous few days, thanks to Martin for leading & thanks to Barbara, Bettie & Ruth for their company. 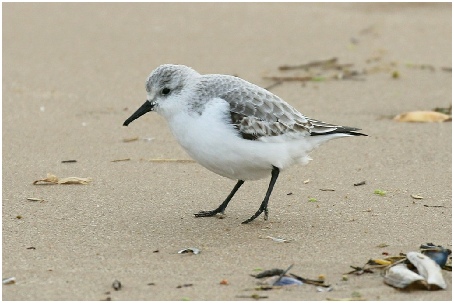 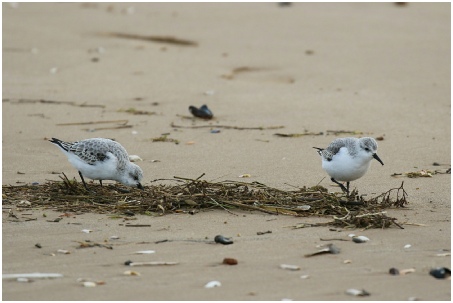 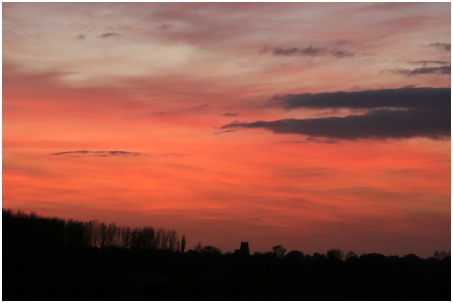 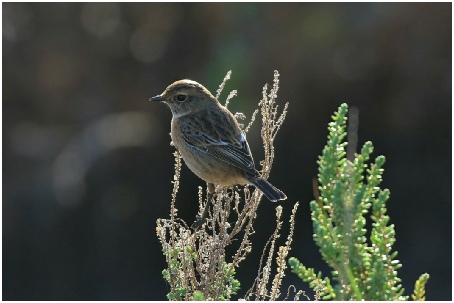 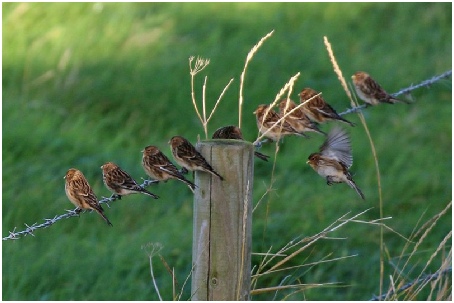 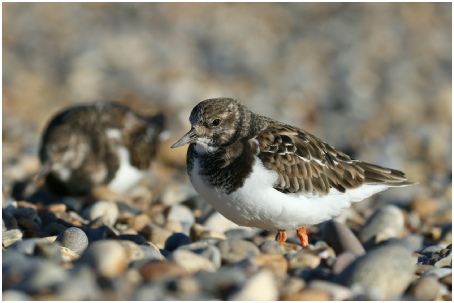 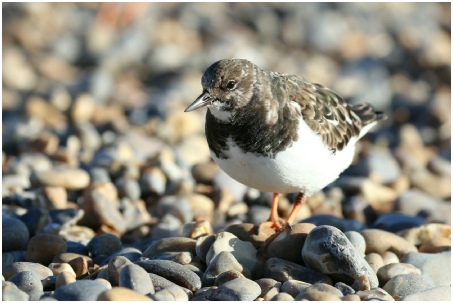 The Mere with Wildfowl 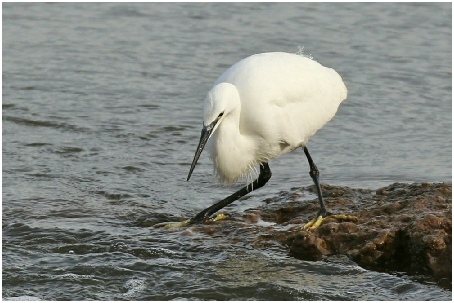