We went down to Labrador Bay RSPB for the Cirl Buntings. The Cirl Buntings were all perched in the hedgerow and came down on to the ground for subathing. They were very mobile and kept flying along the hedge. We saw a few more Cirl Buntings back up near the car park and gave excellent views. After, we heard a report of the Lesser Grey Shrike showing during mid morning, so we headed to Plymouth. The Lesser Grey Shrike had been showing well in a private garden near Mount Batten Point for a good half hour. Even though it was distant at first, we had good scope views. After putting in a bit of time at the point, it flew straight towards us and landed in the hedge. Suddenly, it started to rain heavily and the Shrike disappeared and we didn't know where it went. It turned out that the Shrike was sheltering from the rain in the nearby tree and giving superb views. After the shower passed through, the sun came back out again. The Lesser Grey Shrike perched on the branch for another couple of minutes before it flew and started foraging amongst the bramble bushes out of sight. A great bird to see and a new one for us all! 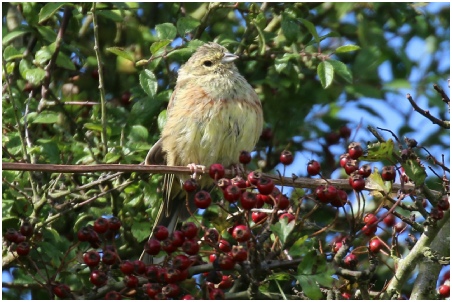 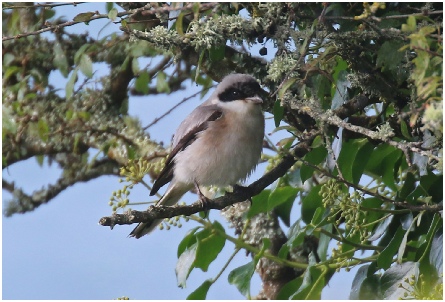 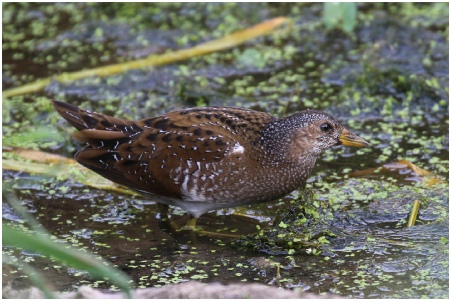 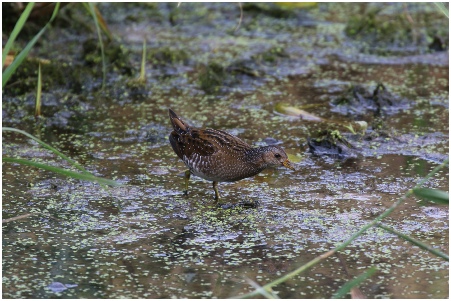 When dad got home from work we popped up to Slimbridge to see the Spotted Crake that had been showing very well. We had excellent views of it and not many people there at that time of day too. 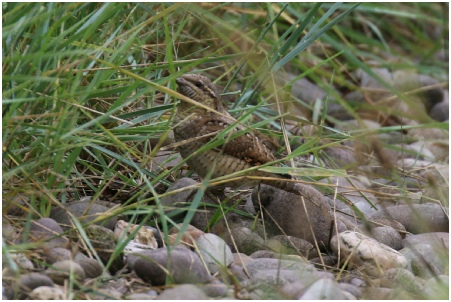 Our final day in Devon began at Exminster Marshes RSPB. Very few waders and the only highligt was a distant Osprey perched in the dead tree and viewed well in the scopes. We headed back to the car park and saw some Juvenile Swallows being fed by the Adults on the top of the yachts. We headed back up the M5 towards Dursley via Steart. At the Steart Gate car park, just over the embankment we saw a 1st Winter Grey Phalarope which was swimming in a small pool. Finally, the quest for one last bird for the weekend. The Wryneck was much more elusive and very flighty. It was present on the coast path just beyond Manor House Farm. Even on the path it was tricky to find because it was hiding in amongst the grass. In the end we decided to leave it in peace and make our back to the minibus. The total birds seen for the weekend was 87 species. 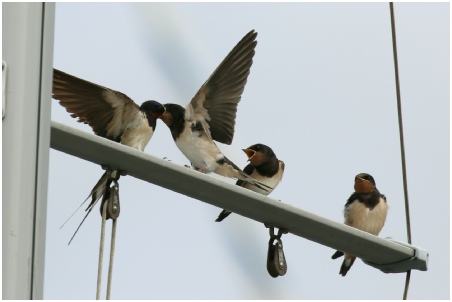 We went to Slimbridge WWT to meet up with the Dursley Birdwatching & Preservation Society for an evening walk around & Landrover tour of the reserve. The Head Warden, Dave Paynter introduced us to the new warden Scott Petrek. We first saw the partial-leucistic Wood Pigeon that was still present around the grounds. We popped into the South Lake Discovery Hide where a Juvenile Black Tern was giving fantastic view in the evening sun perched on a post. There was also a Common Crane and the usual Godwits. In the Rushy Pen we saw three Wader species. These were Green Sandpipers, Common Sandpipers & 3 Common Snipe. We had a surprise sighting of a Stoat and all the birds flew towards it. Too quick for a photo. After we got on the Landrover to explore around the reserve and managed to see some Yellow Wagtails and Wheatear. Afterwards we went back to the car park. 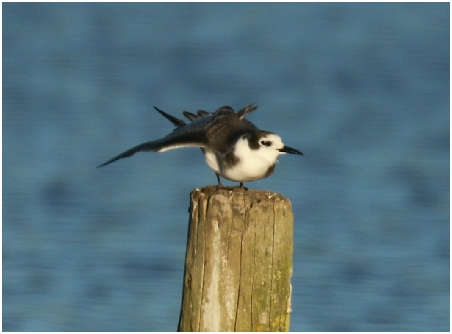 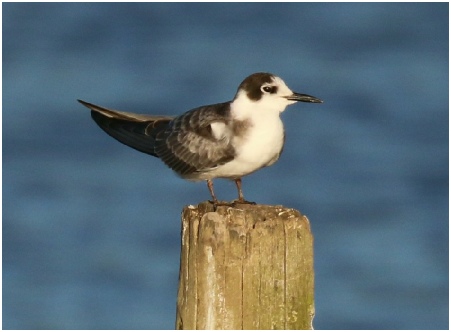 We went to the annual British bird watching fair at Rutland Water from Saturday-Monday this year. We first brought Chris Packham's new book which was called "Fingers in a sparkle Jar". Chris Packham was doing some book signing in one of the Marquees and I asked him to sign my book & programme. Henry the Hen Harrier was also on the same Marquee stand. Due to a change of talks at the last minute, it was announced on twitter that John Aitchison was doing a talk on all 3 days. So at 12:00- 12:20 me & Mum went to a talk by him about" Wildlife filming." After the talk I also asked him to sign my programme. Mum bought his book at his stand called" The Shark & the Albatross". He signed it for Mum. We went to the RSPB stand in one of the Marquees where Mike Dilger was doing a book signing. I only asked to sign my progamme as we have all his books already. In the afternoon we went to a Simon King talk which was called "Enough". After the talk we went to see him in his Marquee. I brought his book which was called " Nature Watch". I asked him to sign it and my progamme. In the evening we went to Lyndon Nature Reserve. The highlight of the evening was a sighting of a 1st Summer Male Long-tailed Duck that was showed well from the Teal Hide. Also a couple of Black Terns were flying distantly on the other side of the lake. A few Little Egrets were also present.

In another Marquee we brought Mark Avery's book which was called "Inglorious". I ask Mark to sign it as well as my progamme. At 12:00 me & Mum went to see Birdless Pointbrain hosted by Nigel Redman & assisted by Neil Glenn. There weren't many celebrities taking part in the quiz this year, just Nick Baker & Mike Dilger with some of the volunteers from Rutland Water. Afterward we stayed for a talk by Nick Baker called "Building a naturalist".  In the evening we went back to Lyndon Nature Reserve, this time we walked down to see the Ospreys in Manton Bay. The Juvenile was perched on a branch near the nest. The Black-headed Gull was up in the nest foraging for any fish remains. We went to the Wader Scrape Hide and saw a Ruff, a couple of Lapwing & a pair of Curlew Sandpipers. We then made our back to the car park.

Our final day in Rutland Water was exploring the rest of Nature Reserve as much as we can. It was strange to see all the marquees being taken down after a superb bird fair. We saw a Female Southern Hawker perched on a twig. Near the hides was a Female Common Darter. The Shoveler Hide seems to be the place to see other Waders. These include Greenshanks, Black-tailed Godwits, Green Sandpipers & Ruff. In the Buzzard Hide we only saw a nice Little Egret. However the best highlight of the day was an Osprey perched on a fence post from the Harrier Hide, along with 3 Great White Egrets. There were plenty of Small Tortoisehell Butterflies on the wing. From the Anglian Bird Watching Centre we had better views of one of the Great White Egrets foraging in the water. Our final sighting of day and Rutland Water for this year, was this Painted Lady which landed on the path, near the car park at Lyndon.  Another great Bird Fair and good to meet up with old friends there too. 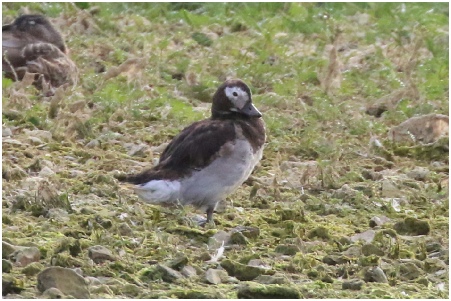 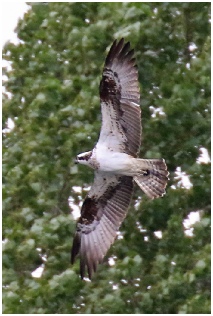 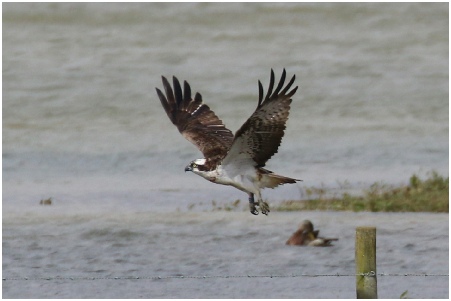 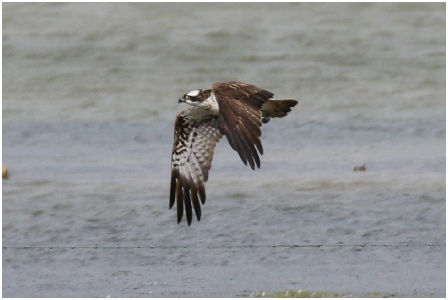 We started our weekend to Devon with the Dursley Birdwatching & Preservation Society at Aylesbeare Common RSPB. It was very windy and the Dartford Warblers were keeping their heads down. We saw Linnets, Common Snipe, a flyover Common Redstart, Stonechats and Buzzard.

At Bowling Green Marsh RSPB we had a sighting of a Kingfisher on a post which was a highlight. There were a few waders from the viewing platform over the River Exe including Greenshank, Redshank and Bar-tailed Godwits. The weather didn’t help much as by now the showers had turned into torrential rain.

We had a brief stop at Ladrador Bay to look for Cirl Bunting. Most of the group walked down the slope, but Mum couldn’t manage it as it was very slippy in the rain. We walked around on the top path and spotted some Cirl Bunting in the hedge right by the Car Park. The group then headed to our accomodation near Paignton for the next couple of nights. 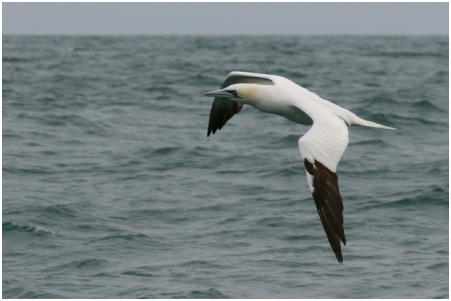 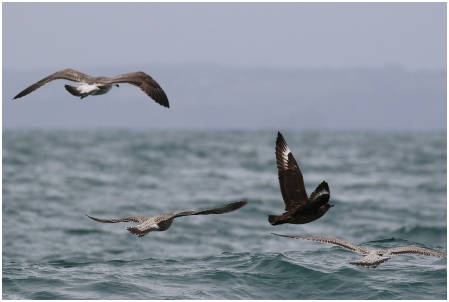 The weather was better for the pelagic from Brixham. In the harbour wall we saw a 2nd brood of Swallows about ready to fledge. There was already a few Turnstones back in the harbour & some were still showing a bit of orange of Summer plumage. When we were heading out of Brixham on our morning pelagic, we saw the first Purple Sandpipers of the Winter. Further out were a few Harbour Porpoises, Gannets, Fulmar & Great Skua. Also saw my first ever Storm Petrel fly past several times, but sadly no picture as it was very choppy. We did see also distant Balearic & Manx Shearwaters flying past and a group pf Common Scoter. Back at Brixham Harbour we saw a few more Turnstones & Rock Pipit. In the afternoon we went to Clennon Valley near Paignton. We saw Long-tailed Tits , Chiffchaffs, Nuthatch, Grey Heron, Bullfinch, Kingfsher and a Male Gadwall on the pond. A couple of Red Admirals were nectaring on the buddleias & a Wheatear in the fields. We went back to Brixham for our evening meal on the balcony of ‘Rockfish’ overlooking the harbour.